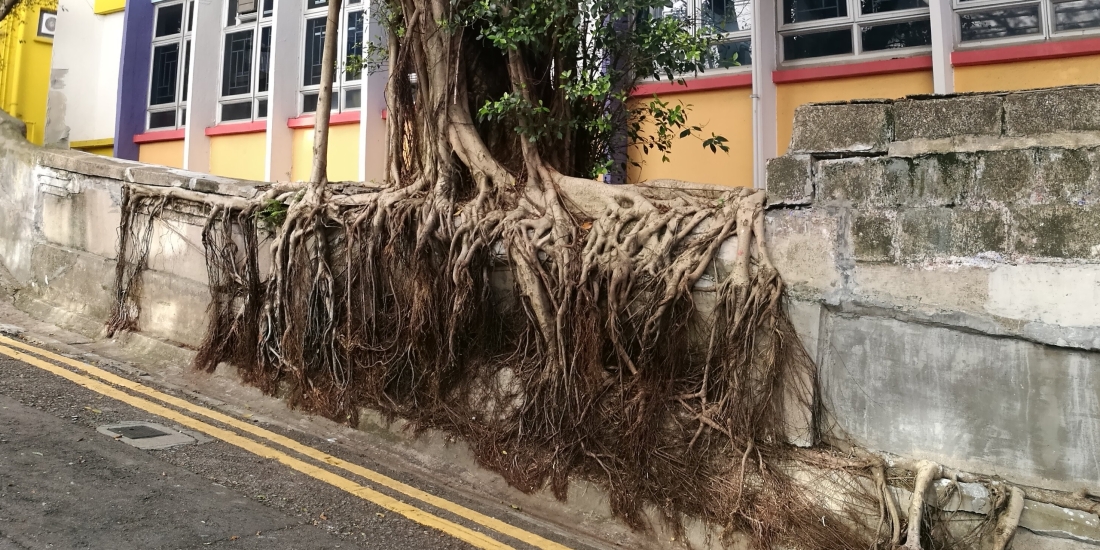 Location: Tank Lane near the corner of Bridges Street

There are plenty of trees in Hong Kong that grow on the side of walls, or from inside walls, but there are also individuals that have made their home literally on top of a wall, straddling the architecture, like this Chinese Banyan up the hill from Sheung Wan.

The tree is not as prominent or majestic as some of its older relatives, but its station in life is no less spectacular. It has had to grow atop a wall, relying on its ability to send its roots along the solid milieu to fetch nutrients, forming a striking root system that resembles a water fall, frozen against time. 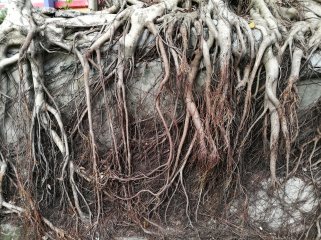 I’m sitting on a wall

But this is no Humpty Dumpty, who fell down and broke into so many pieces that no one could put him back together – no one is going to push this tree from its resting place. On the other hand, the fate of this beautiful, tenacious example of nature’s beautiful symmetry lies with us, and how we engage with nature as we expand our urban landscape.

It has spent decades to form its shape and character, but it can be destroyed with a simple legal notice for redevelopment. So far, Hong Kong has been quite reserved in preserving its arboreal heritage – as evident in many elder walled trees around town. Let’s keep this one, because it is highly unlikely that even Hong Kong, and all its horses and men, can put this incarnation of Humpty Dumpty together, at least not for decades.

If you make it to this area – and it is absolutely one of the most charming areas on Hong Kong Island – you should also take in the bonsai-like cousin just next to Humpty Dumpty. 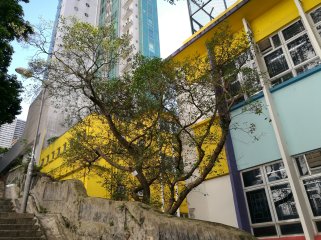 It’s much less dramatic, much smaller, but still makes a nice impression, albeit more like a reserved and sculptured house plant than a wild tree.

Besides the trees, Tank Lane has its own charm. As one of the many stairways that lead from Central and Sheung Wan up to Mid-Levels, it presents a pedestrian-only route that lets you slowly ascent the hill that forms one side of Hong Kong Island. Tank Lane doesn’t get you all the way up to Victoria Peak, but it does give you nice preview along some of the most charming and idyllic parts of old Hong Kong. Enjoy.