Blake Garden is a beautiful park and home to two of Hong Kong’s most magnificent elder Chinese Banyan trees, but it wasn’t always so. What is now an idyllic neighbourhood with charming cafes, boutique shops and galleries was once one of the most rundown slums of Hong Kong and ground zero of an outbreak of bubonic plague in the city back in 1894, which killed thousands of people living in the area. 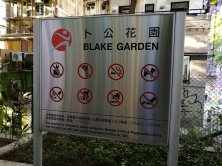 The sanitary conditions of the tenements in the area centred on Tai Ping Shan Street were so bad that the Hong Kong government decided to buy the entire area and razed it to the ground. In its place, authorities opened Blake Garden in 1905, which makes it the first public park in Hong Kong, according to this story.

The garden gets its name from former Hong Kong governor Sir Henry Arthur Blake, and in addition to a small park, offers up several sports pitches for basketball, volleyball and football. But the star attraction, at least for me, is the two massive, ancient Chinese Banyans facing each other on either side of the park.

To the south (on the higher slope) is one of the most district trees in the city. Someone once described this tree to me as the ‘tree wall,’ and it is easy to understand why. This ‘Old and valuable’ tree of Hong Kong (LCSD CW/36) features a formidable wall of aerial roots that span several metres across and some two metres high. 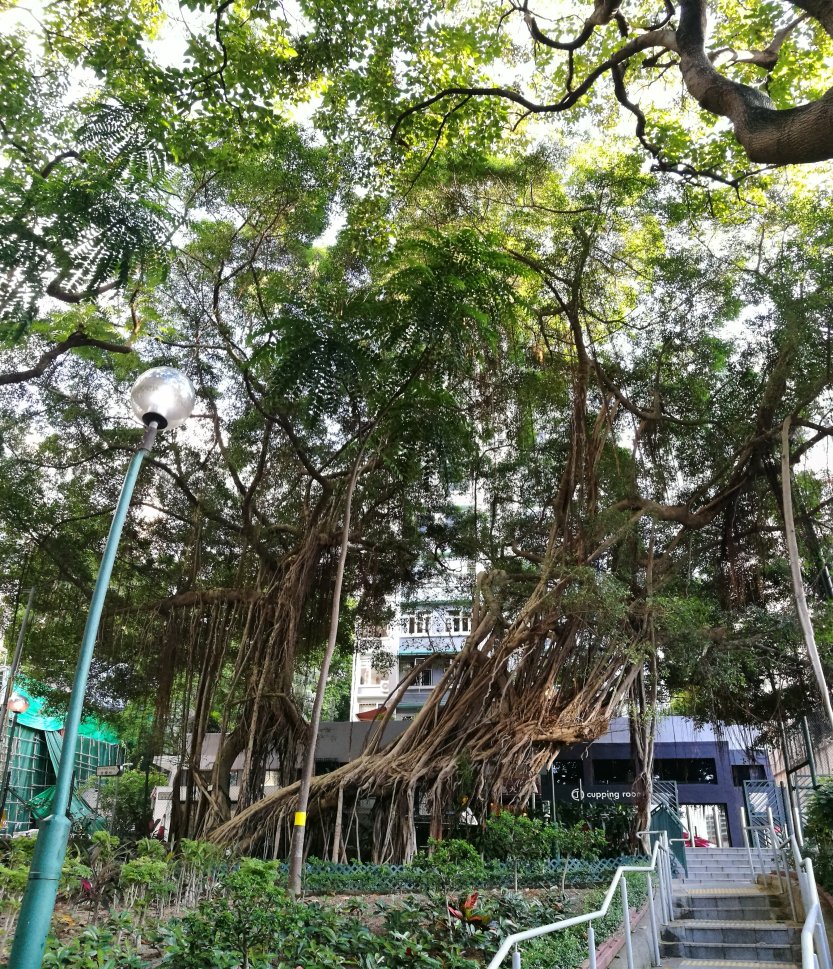 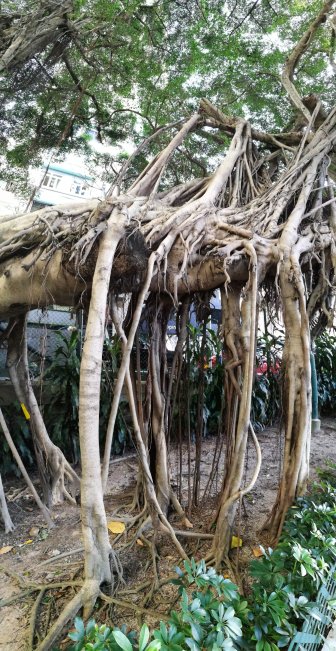 On either side of this wall are two massive trunks that reach into the sky like castles. 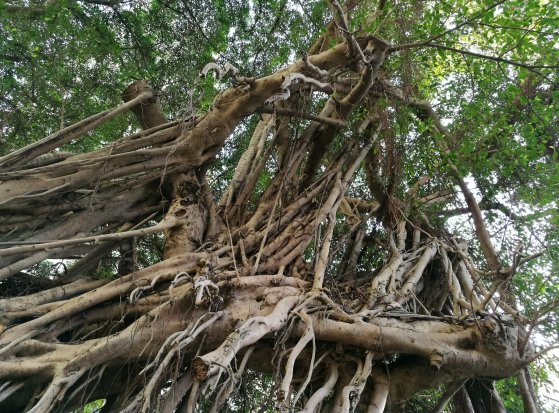 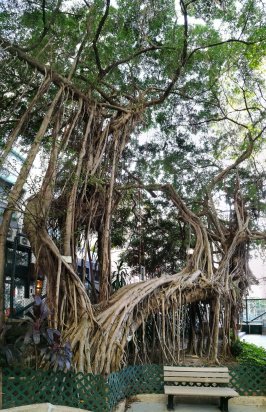 Struggling in opposite directions 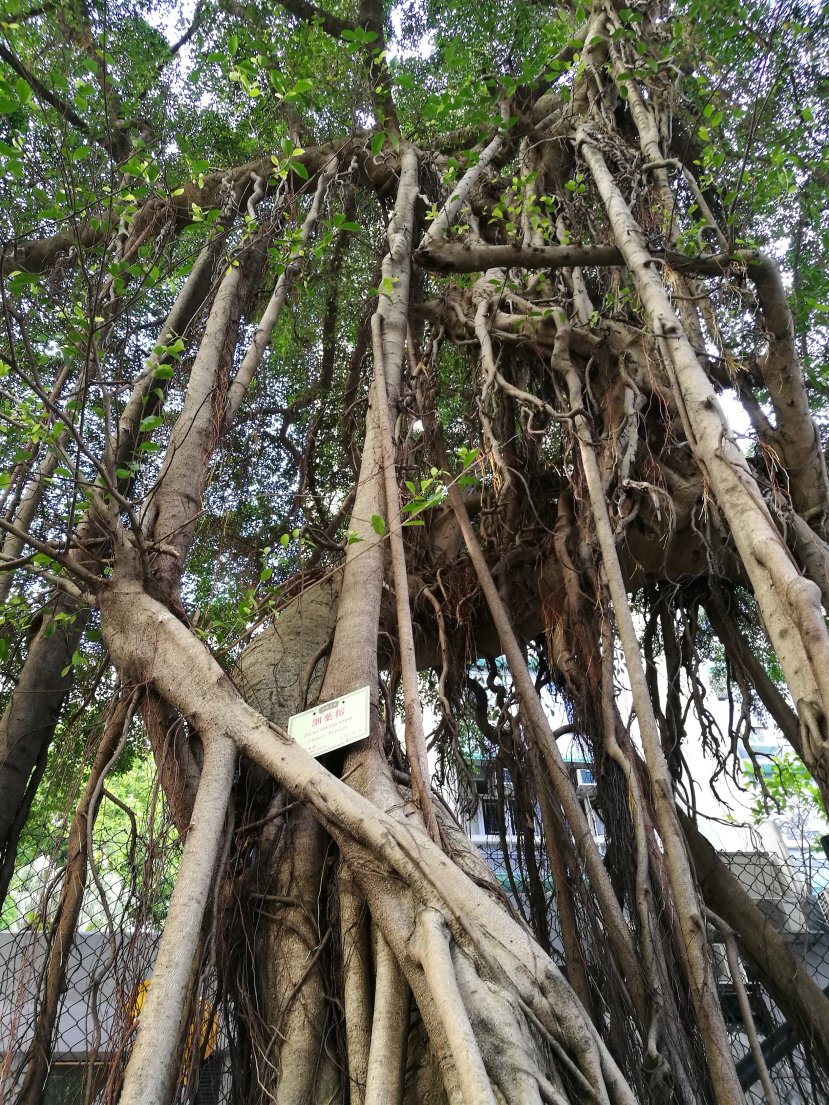 There are plenty of large and old China Banyans around, but there are none that has the broad presence of this “tree wall.” It also seems an apt monument to commemorate the area’s dark history. While the roots form an impressive vista, the way the tree appears to be split apart in the middle and forced into two different directions can seem tortured, tragic, even eerie. The tree is obviously thriving, but there is clear evidence of struggles in its past, much like this garden that grew out of a slum.

Facing the “tree wall” on the other end of the park is another ‘Old and valuable’ tree of Hong Kong (LCSD CW/37). This one is more conventional in its form with a main trunk and several prominent limbs reaching out horizontally, but a closer look reveals several distinct features.

Like all Chinese Banyans, aerial roots hang down from the limbs of this giant, but instead of just hanging in the air, many from this tree actually anchored into the ground, forming supports for its long branches as they reach out horizontally to cover the ground. One such limb reaches directly towards its kin on the other side of the park, and is supported by two strong braces. Perhaps in the distant feature, it will actually succeed in closing the expanse between the two. Only then will we be able to tell whether this is a sign of affection, or a prelude of an attack. 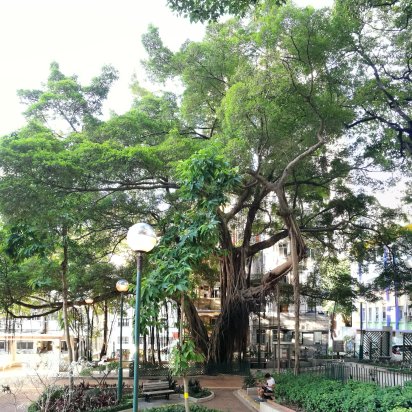 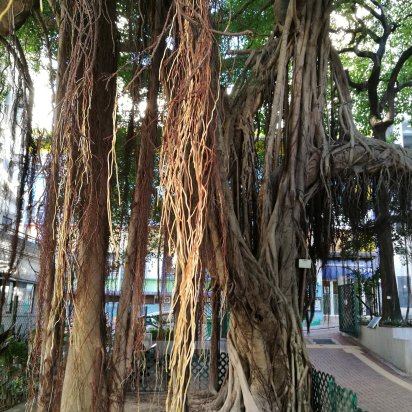 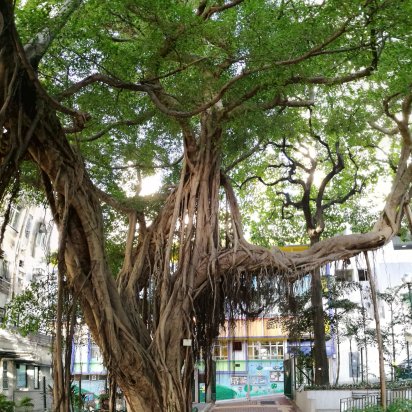 To get the full effect of these two eternal companions/rivals, look for the spot right in the middle of the park and do a quick 180 degree pivot between the two.

After you have had enough of these two wondrous elders, grab a coffee or drink on Tai Ping Shan Street, or make you way to the upper slope, go up the stairs and visit the Hong Kong Museum of Medical Sciences, which used to be the city’s Pathological Institute, where researchers in 1894 discovered and identified ‘yersinia pestis,’ the organism that causes the plague in humans. As one friend told me, that is not the only reminder of the area’s dark past. There remains several coffin shops in the vicinity, as well as many shops selling items associated with the afterlife further down the hill.

That said, there is no denying the charm of the area today with its quaint shops and local eateries, historic low rise buildings and pedestrian-friendly streets. And yes, trees. Besides the two prominent representatives inside the park of Blake Garden, there are plenty of trees growing along the border of the expanded grounds, on Pound Lane on the other side of the sports pitches, along Tai Ping Shan Street itself as well as many on the stairs that lead to and from this area, such as Tank Lane.