Welcome to my new series of specie-specific posts on Hong Kong urban trees. It’s kind of a random process, so there is no order or sequence to the series. I will simply try to profile species that I come across as I come across them, starting off with the Lance-leaved Sterculia, just because they are fruiting now (June/July) with their flamboyant, bright orange, star-shaped seed pods all over its canopy..

The first thing I’ve learned about the Lance-leaved Sterculia is that it is native Hong Kong species, so they are quite common along roadsides, especially on Hong Kong island, mid-levels and Bowen Road. There are also clusters of the trees in some parks, such as the Sun Yat Sen Memorial Park in Sheung Wan.

During most of the year, the specie is pretty non-descript, with individuals ranging from 3 to 15 metres tall. And despite its name, the specie’s leaves are really no help in its identification either since they are very average in size, between 10 to 20 centimetres in length, and are shaped like many other species – elongated with moderately pointed ends.

That said, when viewed from the top, the specie does offer up a nice orderly pattern from its canopy. 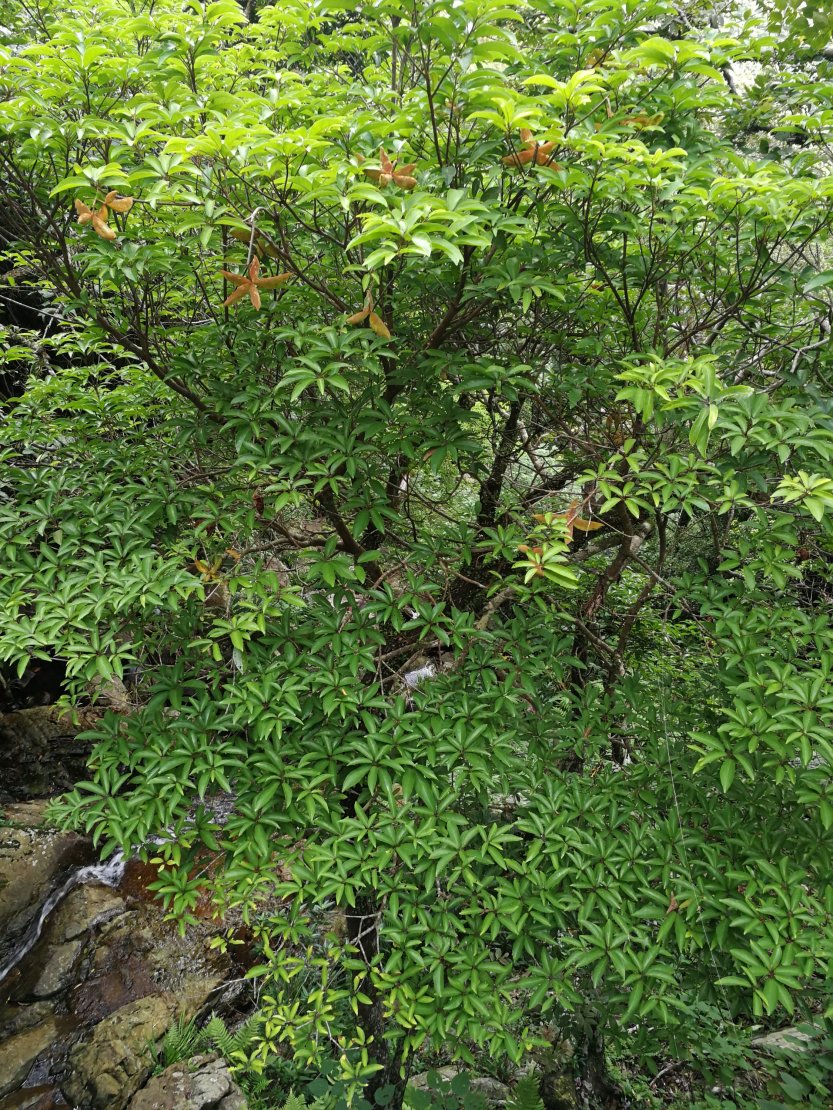 This time of year, the specie is really hard to miss because they explode forth with their large florescent orange fruit. Each individual seed pod resembles a fully stuffed pea pod covered in a suede-like skin that can be up to 7 to 10 centimetres long. But the pods are seldom alone but instead emerged as part of formations of five-prong stars, initially in pale yellow green, but soon transitions into varying shades of bright orange. You really can’t miss them. 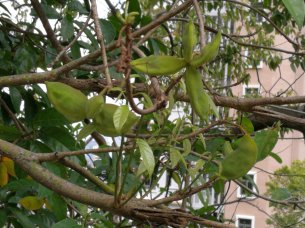 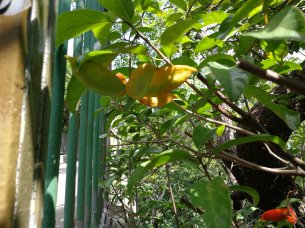 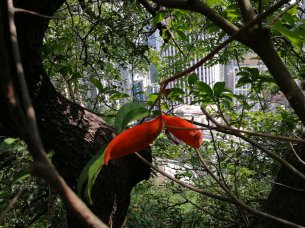 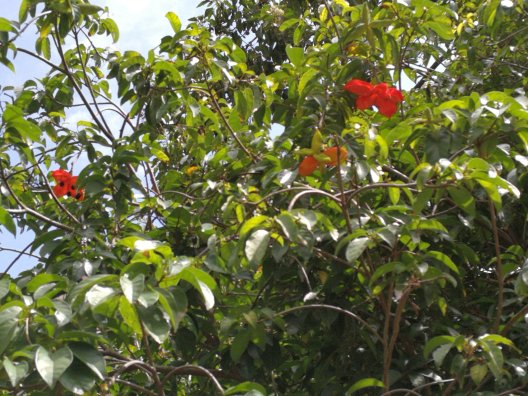 As the fruits ripen, the seed pods open up and expose the jet-black seeds inside, which hang on the bottom of the now flower shape clusters.

Even after the seeds have fallen to the ground and the pods have dried up, the effect is still quite magical.

The fruits of the Lance-leaved Sterculia are definitely its most distinguishing feature, but like many trees species, the flowers that yield these beautiful jewels are deceptively subtle. Instead of the bold, meaty form of the fruit, the flowers are tiny, dainty and delicate. I never would have guessed in a million years that the same tree can offered up such contrasting progenies. 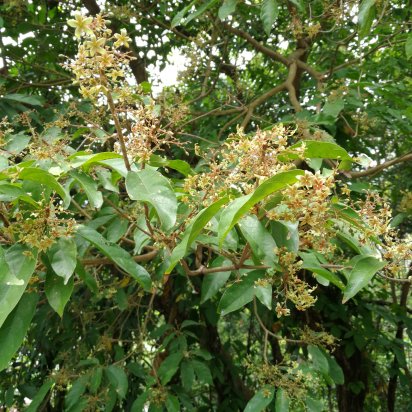 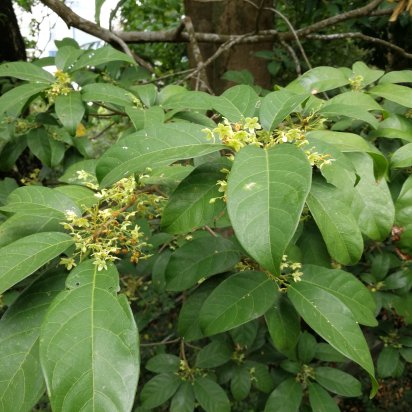 As far as I know, and I’m totally guessing here, the Lance-leaved Sterculia is the only member of the specie that grows commonly in Hong Kong, but it is far from the only ‘Sterculia’ in the world. In fact, a quick search on Wikipedia reveals a dozens of related species that are part of the Sterculioideae genus of the Malvaceae family. And while there is no plainer name for the Lance-leaved Sterculia, the overall sub-species is known as ‘tropical chestnuts’ – at least colloquially, according to Wikipedia.

UPDATE: I have since discovered that the Lance-leaved Sterculia does indeed have a relative in the neighbourhood. The Sterculia Monosperma, otherwise known as the Phoenix Eye Tree, does grow in the region and whose similar, but larger fruit, is an ingredient in some traditional Chinese dishes.

As the ‘mono’ moniker and its reference to a phoenix’s eye indicates, the fruit is a single pod, and when opened, resembles an eye. I was lucky enough to actually get a chance to taste the fruit of the Phoenix Eye, which understandably tasted like chestnuts. 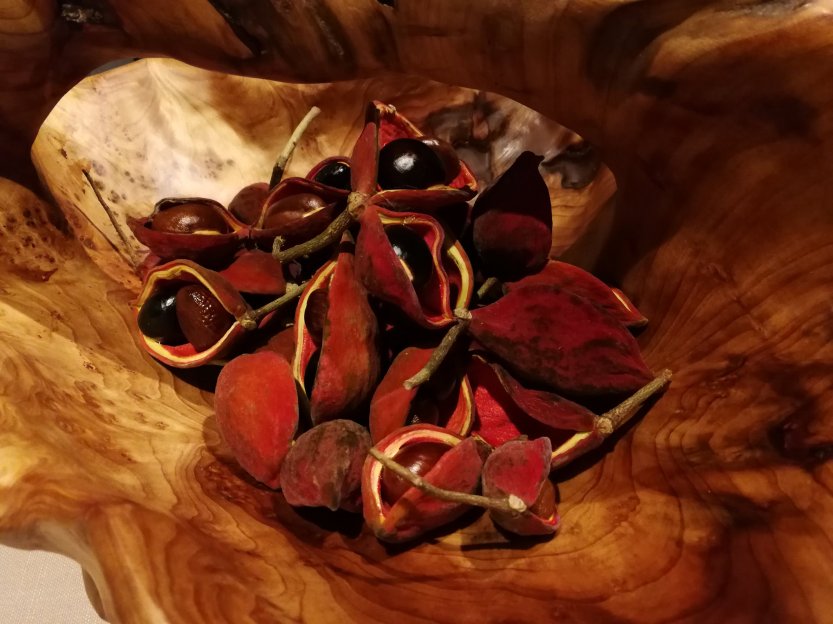 The Phoenix Eye tree itself is quite different from its Hong Kong cousin, with much larger and rounder leaves. But the fruit is unmistakable a relative. 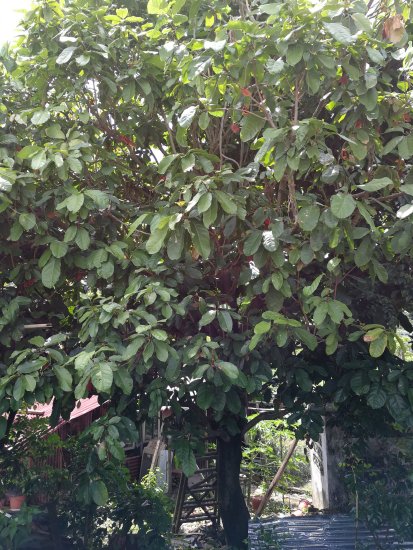 On a less flattering note, the name for the genus comes from Roman mythology’s Sterculius, or Sterquilinus, who is the god of manure. The name comes from the fact that some members of the species, such as sterculia foetida, have parts that smells really foul – I’m sure you get the point. Luckily, the specie growing in Hong Kong appears to have missed the memo when it comes to living up to its namesake, at least I’ve yet to come across one that smells like ‘you know what’.

My personal experience with the Lance-leaved Sterculia is quite special. While it certainly wasn’t the first specie that I managed to identify in my journey to get to know trees, it was one of the most gratifying.

I had seen the flowers of the specie on many occasions but didn’t really spend the effort to find out what they really were. But the first time I saw the fruit, I was totally blown away because of the intensity of colour and seemingly impossible stellar formations. Ever since, the specie has been a constant source of fascination during my meanderings around Hong Kong. Here is hoping you get the same enjoyment out of this astonishing specie.