The Horsetail tree is a pretty common specie in Hong Kong, but I have never seen one that was deemed distinguished enough for the government’s Old and Valuable Tree registrar, until now that is. This particular individual just outside Stanley market is designated by the Architectural Services Department as just such as tree.

And it is quite easy to understand why. Not only is the girth of the main trunk one of the largest I have seen for the species, but it really strikes a pose with its thick, muscular core, long flowing branches and robust canopy. Even more so, given the specie’s delicate needle-like ‘leaves, which likely gave the specie’s its common English name. 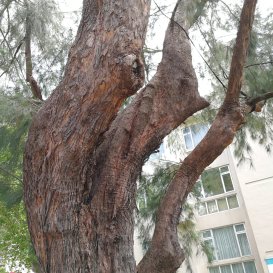 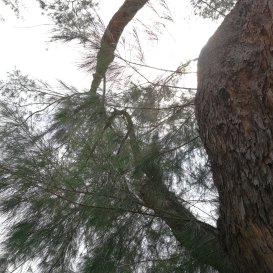 The specie is pretty easy to identify. The bark of the trunk is rough, like scales that are peeling off. The other distinguishing feature is its ‘leaves,’ which resembles more like pine needles than conventional foliage. 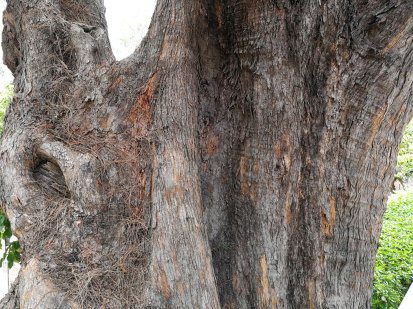 Just on a side note, despite its thin, needle-like leaves, the Horsetail Tree is not a ‘pine’ or pinus in scientific terms. The specie actually belongs to the Casuarinaceae family, which is a specie native to the southern hemisphere, unlike the Pinus, which represent the pines on the northern hemisphere.

The specie originates from the Australia and the Pacific Islands, but I would not have guessed that given the abundance, and success, of the specie in Hong Kong. Horsetail trees can literally be found in every neighbourhood in Hong Kong. Look for them along side streets, in parks and gardens.

Horsetail Trees aren’t exactly the the darlings of Hong Kong’s arboreal universe. The species certainly do not have the scale and width of say, the Indian Rubber Tree (ficus elastica), nor the flamboyant personality of the Golden Trumpet (tabebuia chrysantha) but it is nevertheless a gorgeous specie if you take a closer look.