Sometimes an apple is actually not an apple, and even if something is rose  , you can’t call it a rose. Take the example of the Java Apple tree (syzygium samarangense), which doesn’t have anything to do with apples, since it’s actually a relative of the guava. And despite its fruit being reddish pink, like a rose, it is not the Rose Apple tree (syzygium jambos), a close relative that bears yellow and white fruit.

Someone seems to have gotten mixed up when naming these two related trees. Both have similar leaves, but the colour of the fruits identifies the two relations, except the names seem to be twisted around backwards and inside out. The one with rose-coloured fruit is actually the Java Apple tree, while the Rose Apple tree bears white and yellow fruit. (Big sigh… as if learning about trees on its own is not hard enough.)

Yellow and white fruits of the Rose Apple tree 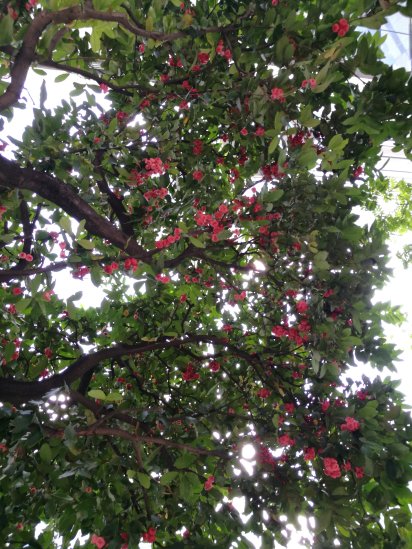 But you don’t have to care about the confusing naming scheme to enjoy these wonder trees and their joyful looking fruit. You can now see them in person outside the Lee Gardens One shopping mall in Causeway Bay.

The specie is pretty nondescript when not flowering or fruiting. The leaves are oblong and waxy around 5 to 8 cms in length. The trunks are rough and dark brown – like I said, pretty hard to identify. One distinguishing feature is the veins of the leaves, which are pretty regular except the lateral veins end before they reach the edge of the leaf and curve up to meet their adjacent peers, forming a sort of leaf inside a leaf pattern.

Outside Lee Gardens One

Once the trees flower, they are unmistakable – with the exception perhaps of its close sibling the Rose Apple tree. Both types of trees sport glamorous white spherical flowers made up of long white hairs that explode forth like miniature fireworks in the foliage.

Another feature of the Java Apple tree is they bear a ton of fruit. As you can see from these photos, the fruits seems to weigh down the branches. Incidentally, the liquid to flesh ratio of the fruit is comparable to watermelons, hence all the weight on the branches. 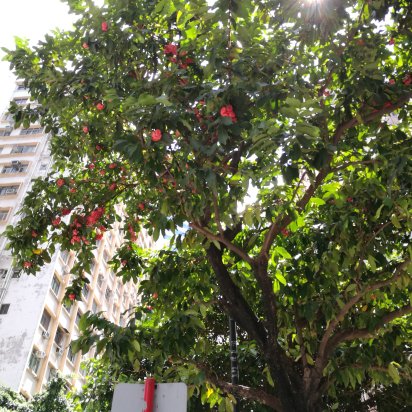 Rosy fruits
I have seen versions of Java Apples at fruit stalls. They look a bit bigger and darker than the ones on these trees. Despite the temptation, I would not recommend trying to taste these wild ones in the city.

There are three other Java Apple trees that I have noticed during my meanderings about town. There is one inside the Hong Kong Zoological and Botanical Gardens next to the ‘octopus camphor‘. 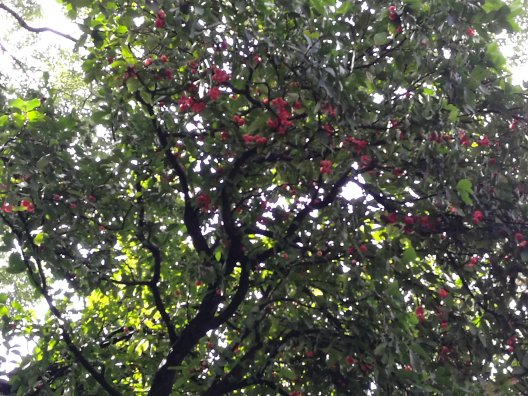 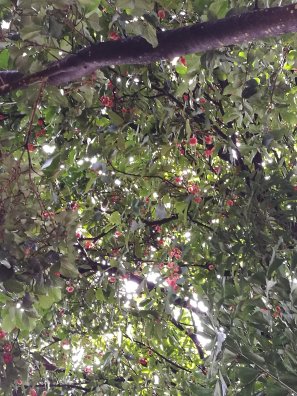 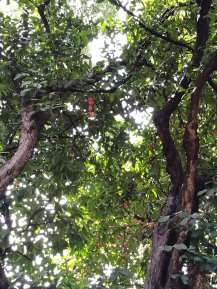 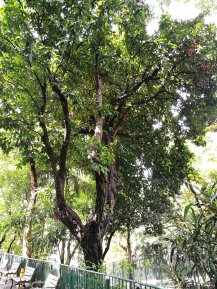 Another is on the other side of the fence from the ‘W‘ on Hatton Road.
and a third grows on a hill above several walled Chinese Banyans on Robinson Road near the corner of Oakland Ave.