Indian Rubber Trees can be massive. There are plenty of examples dotted all over town, with several growing on slopes along Lugard Road on the peak. But this example on Leighton Road, rising neatly up from a retainer wall above and behind a bus stop is arguably the most docile when seen from the front from across the street.

With its curtain of vertical roots that resembled a neat queue to get on a bus, this ‘Old and valuable’ tree of Hong Kong presents a uniformity that is rare for the species, whose roots tend to sprout up randomly over an area. It is only when you get really close and stand directly beneath the tree do you see the complexity of its character.

Up close, the roots are stunning, overhanging the sidewalk and then some. Any appearance of decorum is replaced by unabashed playfulness and vigour. The roots, which span a good 5 metres along the wall, also extend back towards the hill in layer after layer of growth, sometimes so thick it forms a solid wall with others part sparsely spaced like the bars of a cage. 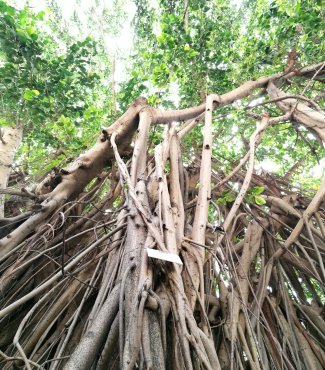 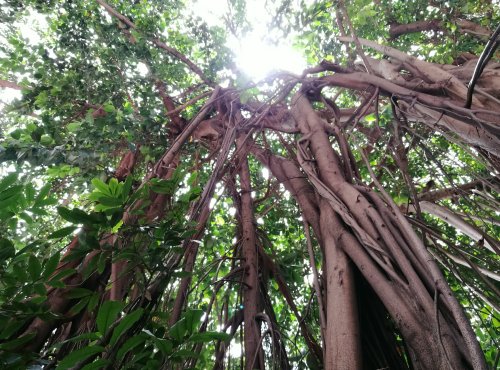 This is a spectacular tree, although it doesn’t seem to be noticed by many who stand underneath its canopy. It’s also easy to miss if you are in a car or even walking underneath because it’s growth starts above most people’s heads. Unless you are across the street, or look up when you are directly below, you could miss it. 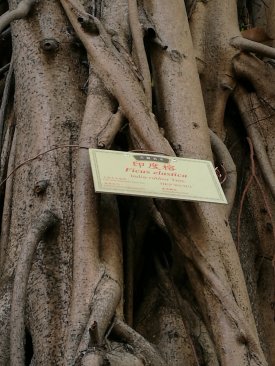 The surrounding area of this tree is pretty interesting too. If you stand under the tree facing the street, to your left is one of the complexes of the famous Po Leung Kuk, the society founded in 1878 for the protection of women and children. According to the society’s history, it was founded at a time when abduction of children and women were a major problem in Hong Kong. The society was formed following a petition by a group of local Chinese to the Governor at the time, Sir John Pope Hennessy, K.C.M.G., to set up Po Leung Kuk to rescue the kidnapped victims.

Also to the left is one end of Caroline Hill Road – which circles the hill behind this tree with the other end of the road coming out to your right. One end of Caroline Hill Road – from Po Leung Kuk – leads you up to the South China Athletic Association, a public sports facilities offering a number of venues, including a bowling alley, badminton courts and I believe, even a golf driving range. Further up is the Hong Kong Stadium. On the other end, Caroline Hill Road is full of neighbourhood restaurants offering both local and international cuisines. Well worth exploring.