There is a small staircase that leads down from the end of Robinson Road, near the intersection of Kotewall Road, to Oaklands Avenue and Lyttelton Road. The area is called Oaklands Ave Sitting Out Area and is probably the size of a backyard for some houses overseas.

What is so remarkable about this little piece of greenery in the city is the sheer diversity of tree treasures that can be found inside, which features some prime examples of prominent species, including several walled Chinese Banyans, several (3) towering Candlenut Trees, a variety of different palms, as well as at least one Camphor, a couple of Bauhinias and some Elephant’s Ears spread on the slope.

Then there is the centrepiece, an arching giant that reaches out alongside the staircase as you descend, like the limb of a forest giant inviting you into its world. I am not 100% positive what species this gently leaning elder, but I’m 99.9% sure its a Chinese Hackberry or something that is very similar. It arches, it bends, it extends, invites, lures, entices, part temptation, part guide, part direction, part expression, it’s art and creation, tree and organism, urban and wild, struggling, thriving. It’s a sight well worth the trip. 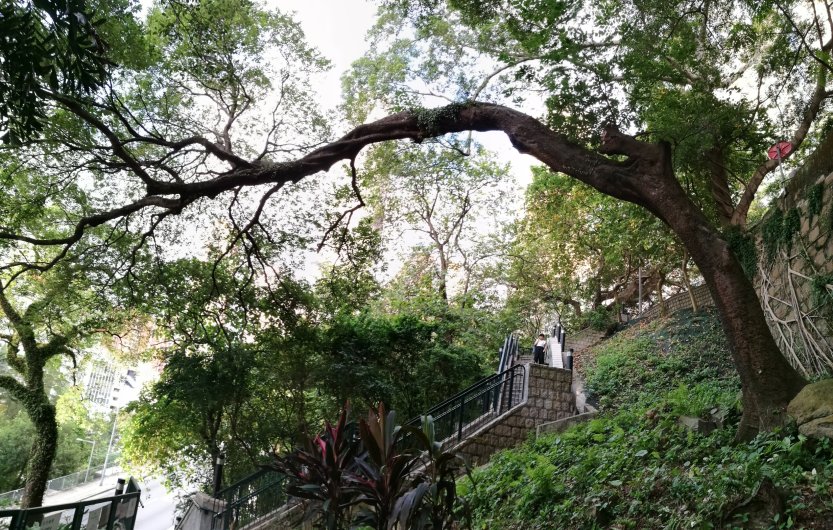 Once you have soaked up the presence of the rainbow giant, turn around and take in the two impressive walled Chinese Banyans. They are not as ancient as, say those on Forbes Street, but both have plenty to offer with their intricate root systems and complex weave of limbs and branches. 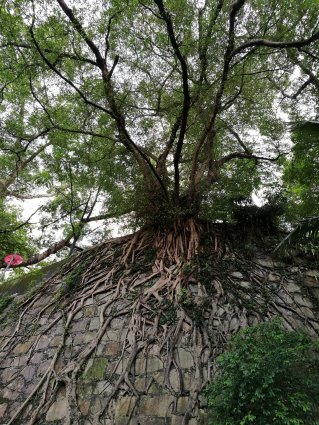 If you are heading down, take the path that leads to the left (right if you are climbing) right in the middle of the slope. Immediately, you will see a Fishtail Pine to your right – it is easy to ID since its namesake comes from its leaves, which are shaped like, you guessed it, a fish’s tail. Keep this in mind, because a bit further down the path is its sibling, which appears to be older with more mature fruits. 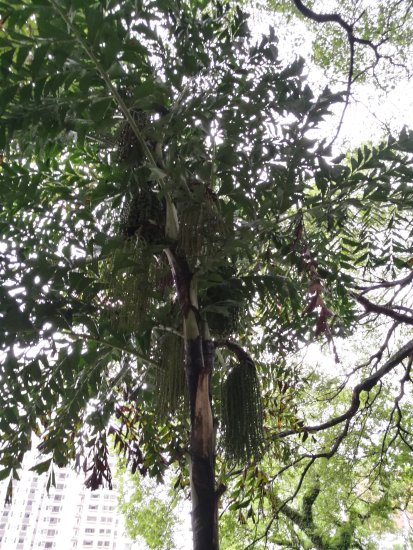 From the first Fishtail Palm, look to your left for two more palms, this time an Alexandra Palm, with its thin smooth trunk and broad wide pinnated leaves, and a young Chinese Fan Palm, with its Pineapple like core trunk and, well, ‘fan-like’ leaves.

Now keep going… just a little further to your right is an impressive elder Common Red-stem Fig tree. From its height and the girth of its trunk, this tree has seen many years, but from all the indications, it is healthy and strong and certainly enjoying its time hanging out on this slope.

As you approach the end of this short – literally about 20 metres – path, just look ahead and up. There are three super tall trees with straight smooth vertical trunks and a full crown that only begins to spread out about three-quarters the way up. There are many, many Candlenut trees in Hong Kong, but these three are some of the tallest I’ve come across.

Three very tall Candlenut Trees in the back

Your journey is not done yet, but it’s time to go back to the staircase and continue on your way. Right in front of you, guarding the bottom entrance of the stairs is a Camphor, not particular large or old, but covered in vines so it looks like its wearing a green sweater despite the Hong Kong heat.

As you complete this short and hopefully rewarding journey, turn back and look around. There are plenty of other, albeit less stand-out individuals, including several Bauhinias, some Elephant Ears, and many more that I haven’t been able to identify. 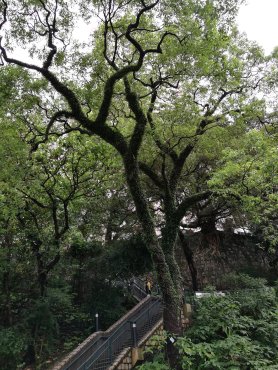 Obviously, this short 15min, or less, immersion into the world of Hong Kong trees is only the appetiser. Look across the street and you will see a beautiful Taiwan Acacia. Also, the immediate surrounding area is a treasure trove of botany. Sign up and follow the blog for more.